What an amazing experience to accompany my son, the computer gamer to a Symphony concert “The Legend of Zelda – Symphony of the Goddesses.” The tickets for this single Toronto show at the Sony Centre sold out within one week! Pretty impressive as this was a symphony concert in a theatre with capacity for over 3,000 and tickets ranging in price from $35 to $125!

The audience was a mix of ages and genders. From parents like myself to many groups of gamer types, including costume clad elves (Link is an elf?) and princesses.  There was definitely a significant presence of gaming devices in the audience, not just the smart phone gaming but many Nintendo DS’s of various generations were seen out in the open. 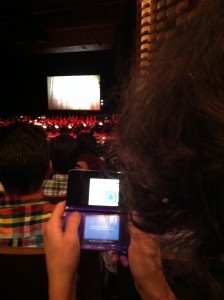 Figure 1: Nintendo DS 3D in the audience with orchestra in the background. 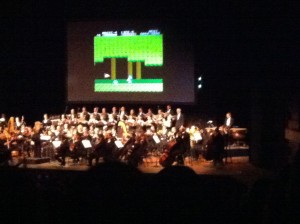 On stage is a 100 piece symphony orchestra, comprised of local musicians and a 25 person choir! The “pretty conductor,” a young beautiful Irish woman, Eímear Noone gave a great performance and raised a few male teenage pulses in the crowd!

The giant screen over the heads of the orchestra displayed videos from across the 25 years of Zelda game franchises. The video exerts set to the beautiful orchestral music, brought thoughts of early silent films accompanied by musicians on stage.  The video segments varied in resolution from the early pixilated 2D images to the stunning 3D visuals in HD. The musical pieces including a full four-movement symphony were based on different Zelda locals and stories. The audience roared when their favorite games were mentioned and the music performed! My son was impressed by the transformation of the 2 bit audio melodies of the early games into the rich sounding orchestral arrangements.

The visuals ranged from game play excerpts including game controller details and level scores to more cinematic visualizations. These high tech visuals were interspersed with live close ups of the performing musicians and choir members. These smooth seamless transitions connecting the two worlds were impactful.

The audience was mesmerized! “This was the shortest one hour of my life!” was heard during the intermission from a late teen audience member sporting a white linen suit and white hat and accompanied by a group of gaming friends.

The audience comprised of not the usual symphonic crowd thoroughly enjoyed the show! 3 encores and 4 standing ovations later, shouts of “one more show!” and tweets of “moved to tears” and “wept like a baby” during the ‘Link to the Past’ finale.

What a wonderful way to bring the old and new together, the culture and technology and make the old genres, such as orchestral symphonic performances, relevant and exciting for the next generations!

Perhaps the next iteration of this show will allow the audience members to collaboratively create the visuals during the live orchestra performance or vice versa have the orchestra improvise or jam to the visuals created by game play! 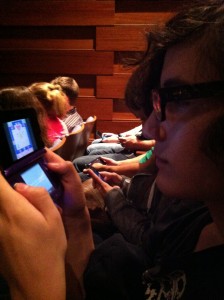 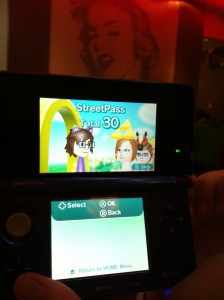 Author: Ilona Posner is a Mother, Educator and User Experience Consultant based in Toronto, Canada

Here is a Twitter Conversation that followed this review.
Eimear Noone is the “Pretty Conductor” of the Zelda Symphony. 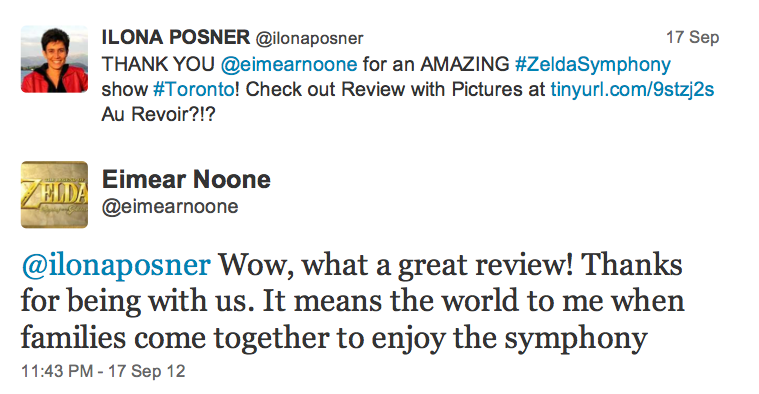